Home » GENERA G-H » Hermannia » Hermannia trifurca textures and colours
Back to Category Overview
Total images in all categories: 9,579
Total number of hits on all images: 4,304,165 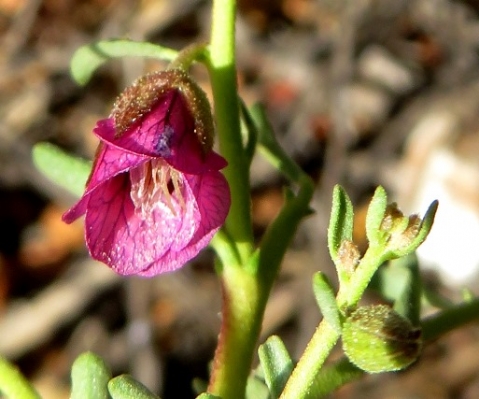 The bell-shaped Hermannia trifurca flower has at least as much, possibly more colour on the outside of its corolla than on the inside. This is an appropriate feature in nodding flowers for marketing food to pollinators.

At the stem-tip in picture new growth is subtended by the leaf at each node, initially in what appears to be a protective mode. Those plants adhering to an ostensibly caring posture over sufficiently many generations may fare better in reproduction; the feature established in the evolution of plant appearance.

Humans fond of deriving principles from observed phenomena may appreciate this lesson about caring to be so basic, requiring no brains.

The bud in picture resembles a green rugby ball, just the kind of analogy one might expect when a World Cup event for the sport is imminent in Japan; the green suggesting the Springboks or possibly Ireland (Vlok and Schutte-Vlok, 2010; Manning, 2007; Manning and Goldblatt, 1997; iNaturalist).