Home » GENERA G-H » Hermannia » Hermannia trifurca
Back to Category Overview
Total images in all categories: 9,898
Total number of hits on all images: 4,595,564 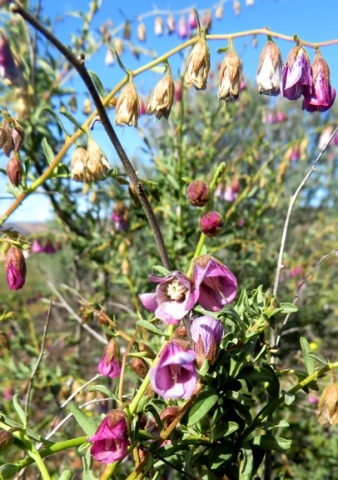 Hermannia trifurca is a twiggy and hairy shrublet reaching heights from 1 m to 1,5 m. The bush grows from a single stem, not resprouting after fire. Among the Afrikaans common names of the plant are koerasie and koerasiebos, a mutilation or corruption in translation of the English word courage, referring to libido.

Leaves and flowers of several Hermannia species are eaten, mostly by children. The domain of human beliefs follows the range of imagination and fantasy. It is possible that some expect a heightened libido from ingesting certain parts of this plant. Similar fantasies are associated with abalone and rhino horn.

The species distribution is in parts of the Northern Cape and the Western Cape, also beyond the border, at least in Namibia.

The habitat is stony and sandy soils in arid and winter rainfall conditions, often in renosterveld or Karoo scrub. The species is not considered to be threatened in its habitat early in the twenty first century (Vlok and Schutte-Vlok, 2010; Manning, 2007; Manning and Goldblatt, 1997; iNaturalist; http://redlist.sanbi.org).