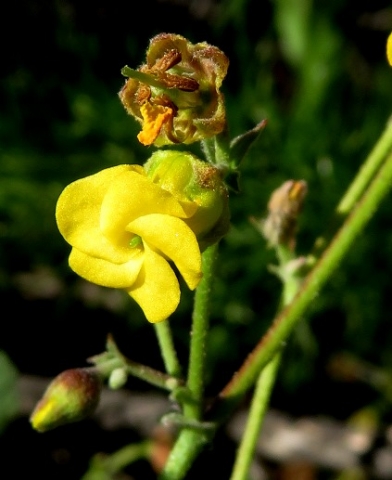 Of the about 180 species of Hermannia on earth, 162 occur in southern Africa, 60 in the fynbos, 50 in the Little Karoo and 35 in Namaqualand. There are three hermannias in the Americas and at least one in Australia.

Hermannia plants are herbs or shrublets. Plant parts like leaves stems and calyces often have coverings of stellate hairs, i.e. hairs split into a star-shape, the branches in one plane. The hairs may also be glandular, called trichomes, consisting of a stalk of variable length supporting a secretory head. A trichome may be a single cell or a group of cells. The secretion may accumulate inside a vacuole inside the cell, among the cells, or outside the cell wall.

The alternate leaves may have margins that are toothed, entire or variously divided, mostly subtended by leaf-like stipules.

The flowers may be yellow, red, orange or pink, growing from leaf axils or at stem-tips, solitary or in groups. The calyx is five-lobed; there are five petals, five stamens and five locules in the ovary and capsule. The petals may be sessile or clawed with in-folding margins on the claw, their blades spiralling, twisting or flaring (in some species).

The filaments of the stamens are more or less attached to each other at the base and winged or cross-shaped. The lance-shaped anthers are variably two-lobed at their tips. The seeds are kidney-shaped and ribbed.

Children that spend much time in the veld may learn to eat the flowers (and sometimes leaves) of some hermannias, stripping all the soft parts off a stem as broodkos (bread food). Most species are browsed by game and stock.

Plant parts of some species feature in traditional medicine, for instance in the treatment of wounds, hence the name pleisterbos (plaster bush) for some species (Manning, 2007; Leistner, (Ed.), 2000; www.sbs.utexas.edu).