Home » GENERA G-H » Hermannia » Hermannia rudis
Back to Category Overview
Total images in all categories: 9,889
Total number of hits on all images: 4,584,073 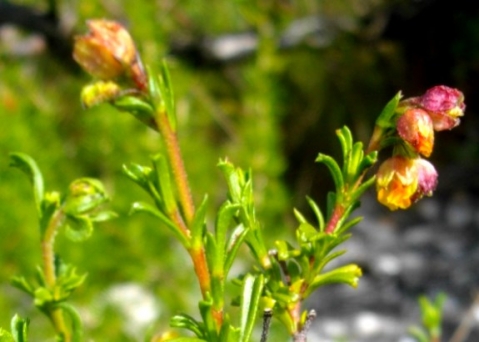 Hermannia rudis is an erect or spreading shrublet reaching heights from 40 cm to 60 cm. The specific name, rudis, is a Latin word meaning wild, untilled or unused, maybe referring to the general habit of the plant. H. rudis is a resprouter, soon showing lush new growth after a fire.

The species grows from the Cape Peninsula to around Swellendam on dry, sandy, coastal flats and rocky lower slopes. The species is not considered to be threatened in its habitat early in the twenty first century (Burman and Bean, 1985; Bond and Goldblatt, 1984; Andrew, 2017; iNaturalist; http://fernkloof.org.za; http://redlist.sanbi.org).