Home » GENERA G-H » Hermannia » Hermannia pinnata
Back to Category Overview
Total images in all categories: 10,346
Total number of hits on all images: 5,047,721 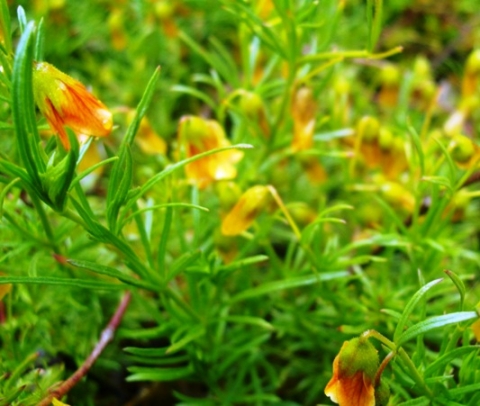 The doll’s rose or kruip-poprosie (creeping doll's rose) as Hermannia pinnata is known in Afrikaans, is a mat-forming, sprawling shrublet. The narrow green leaves are either linear, two- or three-lobed. At the leaf base similarly narrow and lobed green stipules persist, resembling the leaves and creating the impression of whorls of leaves being present.

The flowers of Hermannia pinnata are orange to yellow, bell-shaped and pendulous. Dark red veins are visible on the orange corolla surfaces in the picture. The flowers attract bees and are honey-scented, begging the question as to cause and effect. A flower is not so easily credited for giving honey its scent; more often blamed when the honey has an undesirable taste.

The species distribution is dunes and flatland on the Western Cape west coast from the Cape Peninsula to Velddrif (www.plantzafrica.com).