Home » GENERA G-H » Hermannia » Hermannia joubertiana
Back to Category Overview
Total images in all categories: 10,355
Total number of hits on all images: 5,061,749 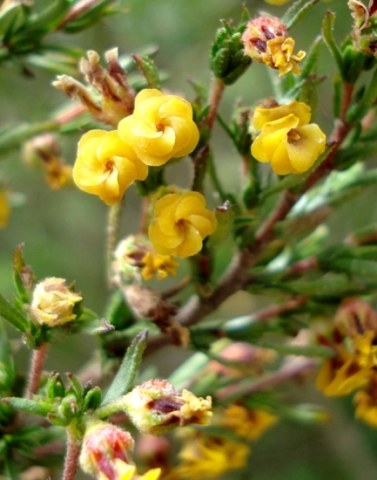 Hermannia joubertiana is a sparsely branched, erect shrublet growing wand-like and somewhat spreading stems to heights around 80 cm. The habitat is Overberg dune strandveld and Agulhas limestone fynbos. The species is distributed along the coast in sandy soil from Hermanus to east of Mossel Bay.

This plant was seen in Fernkloof at the beginning of November, one of the about eight Hermannia species occurring there. Note how some older flowers have reflexed dark red sepal lobes; young flowers have them straight next to the flaring corolla.

There are clockwise as well as anticlockwise twisting corollas present in the photo (Privett and Lutzeyer, 2010; JSTOR).