Home » GENERA G-H » Hermannia » Hermannia joubertiana flowers
Back to Category Overview
Total images in all categories: 10,355
Total number of hits on all images: 5,061,855 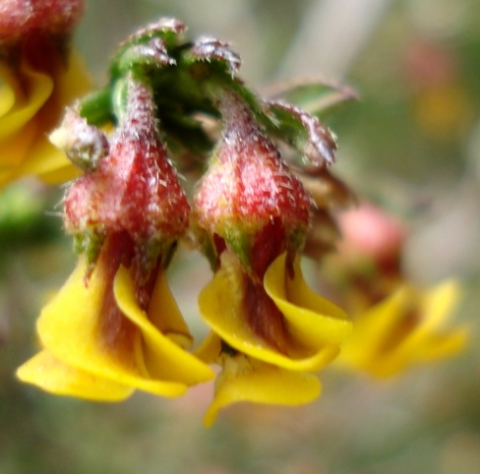 The small flowers of Hermannia joubertiana hang down in small clusters from leaf axils near stem tips on short, sturdy stalks. Bulging, bell-shaped calyces, red, roughly textured and hairy, culminate in narrow, acute sepal lobes that point to the corolla mouth; the calyx being less than half the corolla in length.

Angular folds upon the calyx surfaces can be seen in the photo. The sepal lobes on these flourishing blooms still adhere to the corolla; on older flowers they may be (or are?) reflexed. Golden-yellow corolla colour gives way to a darker, brownish hue in the overlap where the outer petal surface hides from full sun. There is elegance in the curvature of the overlapping petals, covering one margin inside, exposing the other.

The flower differences between this species and the similar H. rudis (also found in Fernkloof where this plant grows) are: H. rudis has rounded sepals lacking the pointed tips, paler corollas that protrude less from the calyx and broader leaves with more pronounced toothing.

The brief flowering season of H. joubertiana lasts from early to mid-spring (Privett and Lutzeyer, 2010; JSTOR).