Home » GENERA G-H » Hermannia » Hermannia hyssopifolia
Back to Category Overview
Total images in all categories: 10,191
Total number of hits on all images: 4,848,540 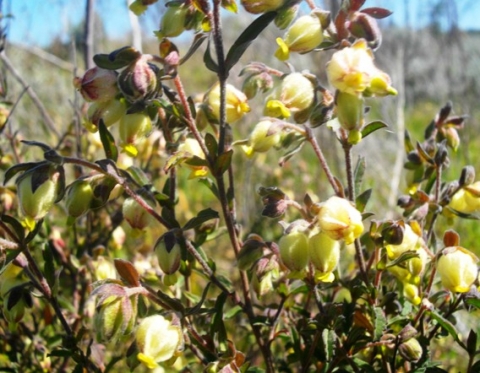 Hermannia hyssopifolia, the pokkiesblom, is a shrub of up to 2 m in height. The plant reseeds, doesn’t resprout after veld fires.

The leaves are wedge-shaped, opposite, hairy and the mature ones are faintly toothed in the upper halves. They get to 2 cm long.

The flower is pale yellow, fading to reddish, but less noticed than the large, urn-shaped and pale yellow calyx that shows fold-lines running to the pin-hole throat. Flowers are usually seen in spring.

The species is distributed along the south coast and adjacent inland region of South Africa, mainly the Little Karoo. This plant was seen in September near Greyton. The habitat is stony slopes near water courses (Vlok and Schutte-Vlok, 2010; Manning, 2009).