Home » GENERA G-H » Hermannia » Hermannia holosericea
Back to Category Overview
Total images in all categories: 10,185
Total number of hits on all images: 4,848,272 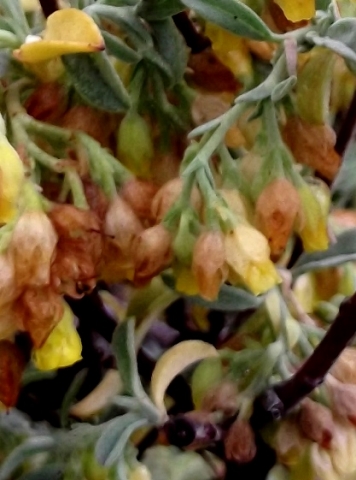 Hermannia holosericea is a branching, velvety shrub or shrublet growing from a single stem to heights between 30 cm and 1,2 m in height. The plant does not resprout after fire.

The greyish leaves have a dense covering of fine hairs. They are ovate, tapering to acute tips and fold in along their midribs. Leaves may be toothed in their upper parts. Leaf size is about 2 cm by 1 cm.

Small yellow flowers are borne from autumn to early spring in branched inflorescences. A hairy, pointed calyx overlaps about half of the corolla in the pendulous flower. Bees frequent the flowers.

The species is found along the Western Cape coast from Bredasdorp to Mossel Bay, the Little Karoo and parts of the Eastern Province. The plant grows on coastal limestone and mid-level slopes inland. The species is not considered to be threatened in its habitat early in the twenty first century (Vlok and Schutte-Vlok, 2010; Bond and Goldblatt, 1984; www.redlist.sanbi.org).