Home » GENERA G-H » Hermannia » Hermannia disermifolia
Back to Category Overview
Total images in all categories: 10,169
Total number of hits on all images: 4,830,238 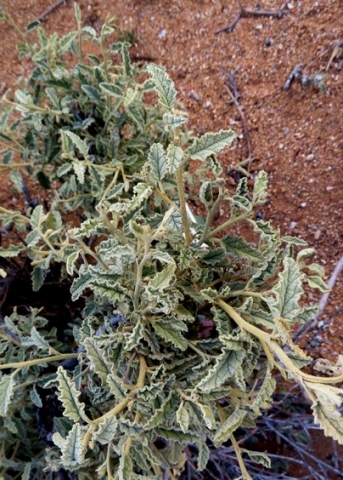 Hermannia disermifolia, in Afrikaans commonly known as the jeukbos (itch bush), is an erect shrub reaching 1 m in height.

The yellow-green to yellow-grey leaves are stalked and covered in tiny, branched hairs. The leaf-shape is oblong to ovate and pleated from the veins sunken on the upper surface. The margins are toothed. The leaves become 3 cm long.

The yellow flowers are borne from leaf axils near branch tips late in winter and early in spring. They have globose, hairy calyces.

The plant is found in the Northern Cape and the north of the Western Cape, maybe in Namibia.This one was seen in the Goegap Nature Reserve in August, not flowering.

H. disermifolia grows in arid and semi-arid conditions on rocky slopes, also among the eastern parts of the Namaqua klipkoppe. The plant is unpalatable to game and stock. The species is not considered to be threatened in its habitat early in the twenty first century (Le Roux, et al, 2005; iNaturalist; http://redlist.sanbi.org).