Home » GENERA G-H » Hermannia » Hermannia depressa leaves
Back to Category Overview
Total images in all categories: 10,191
Total number of hits on all images: 4,848,603 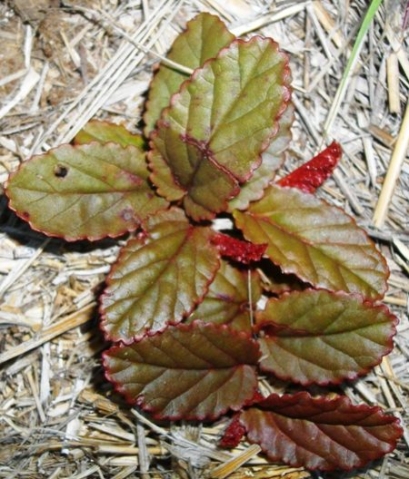 Hermannia depressa, commonly known as roadside doll's rose or in Afrikaans as rooiopslag (red regrowth), is a low-growing perennial that has a woody taproot.

It grows these elliptic to ovate leaves with scalloped margins from spreading stems on the ground. Short-stalked and alternate, the leaves are usually reddish brown or purple, sometimes pale or dark green. Straight lateral veins ascend upon the leaf from midrib to margin, all recessed upon the upper surface.

The bell-shaped flowers with flaring petals nod from short, sometimes branched stalks, only a few cm above the ground. Flower colours vary: they may be mauve, pink, yellowish cream, cerise or orange. Dark veins are sometimes visible upon the corolla. Long, thin and hairy calyx lobes reach near the point where the corolla lobes spread. Flowering occurs from spring to autumn.

The species distribution is in the Highveld, particularly the Free State, Gauteng, North West and Mpumalanga, but also into the Eastern Cape, KwaZulu-Natal and Namibia.

The habitat is grassland where the taproot safeguards the plant’s survival in spite of often being trampled. This specimen was seen south of the Magaliesberg.

The species is not considered threatened in habitat early in the twenty first century (Van Wyk and Malan, 1997; iSpot; www.redlist.sanbi.org).