Home » GENERA G-H » Hermannia » Hermannia cuneifolia
Back to Category Overview
Total images in all categories: 10,349
Total number of hits on all images: 5,049,383 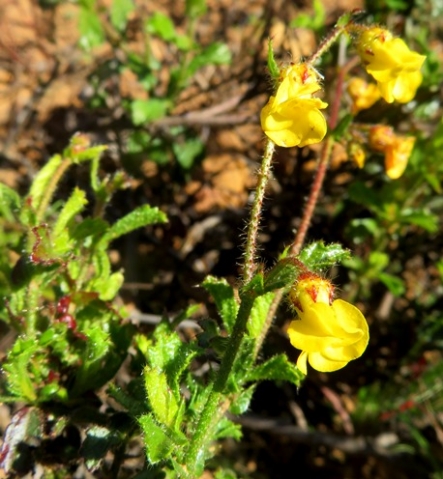 Hermannia cuneifolia, commonly known as the wedge dollsrose and in Afrikaans as the geelpleisterbos (yellow plaster bush), is a branched shrublet reaching heights of 15 cm to 1 m in accordance with the conditions presented across its variable natural distribution.

The single-stemmed plants do not sprout after fire. They are palatable and eagerly browsed. Abundance of mature shrubs indicate veld in good condition.

H. cuneifolia is found coastally and inland in the Northern Cape, Western Cape, the western part of the Eastern Cape and to a lesser extent in the southern Free State. It also grows in southern Namibia and in Lesotho. The photo was taken on the Piketberg Mountain.

The habitat of the wedge dollsrose has varied vegetation, from fynbos, Karoo scrub to grassland. The plants grow on flats and lower slopes, in clay, loam and sandy soils. High and low rainfall, in both the winter and summer rainfall regions suit the species.

Neither of the two varieties of H. cuneifolia, viz. var. cuneifolia and var. glabrescens, is considered to be threatened in its respective habitat early in the twenty first century (Vlok and Schutte-Vlok, 2010; Le Roux, et al, 2005; Bond and Goldblatt, 1984; iNaturalist; http://redlist.sanbi.org).