Home » GENERA G-H » Hermannia » Hermannia cernua
Back to Category Overview
Total images in all categories: 10,174
Total number of hits on all images: 4,832,149 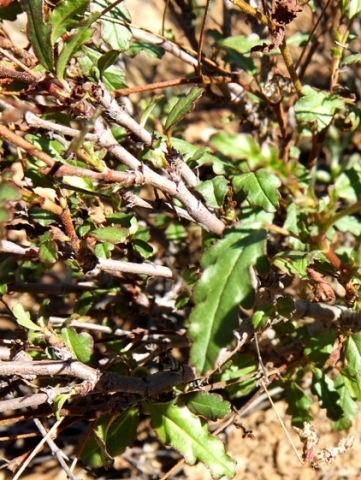 Previous
Image 6 of 59
Next

Hermannia cernua is a branched shrublet that sprawls and becomes only 10 cm tall, or grows erectly to about 25 cm. The leaves are alternate upon the green or red young stems. Old and woody stems tend to become pale grey, more or less leafless.

The species distribution is widespread in southern Africa. This plant was found in the Little Karoo; it also grows in the Eastern and Northern Cape, North West, Free State and Mpumalanga, as well as in Lesotho and Namibia.

The habitat is flats, near dry riverbeds and rocky outcrops in clay soils (Shearing and Van Heerden, 2008; Manning and Goldblatt, 1997).