Home » GENERA G-H » Haemanthus » Haemanthus crispus
Back to Category Overview
Total images in all categories: 9,410
Total number of hits on all images: 4,229,963 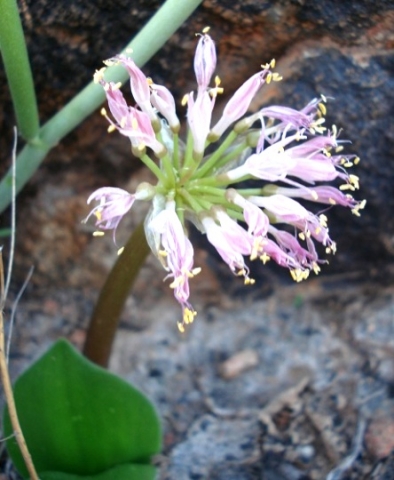 Haemanthus crispus is one of the western, arid region members of the Haemanthus genus that comprises 22 species. All Haemanthus plants are endemic to southern Africa. H. crispus is a winter growing, deciduous, bulbous geophyte distributed from Kosies in the Richtersveld to around Clanwilliam.

The spathe grown annually is reddish, topped by a compact inflorescence standing about 15 cm tall. The inflorescence typically measures 4 cm across. The pink-lilac to almost red flowers are produced in autumn. Four fleshy pink bracts, narrow in shape, surround the flower cluster initially. In this photo the bracts have already withered and are almost hidden below the pink petals and filaments with their yellow anthers.

Two narrow, oblong leaves of about 10 cm in length with wavy red margins are grown annually next to the flower stalk. The specific name crispus (Latin) means curled or crinkled, referring to the leaf margin undulations.

The leaves are folded length-wise and have attractive purple spots or blotches near the base. It is uncertain whether these new leaves in picture will begin undulating later or indicate an identification problem. The red colouring upon the margins is apparently not always present (Williamson, 2010; Bond and Goldblatt, 1984; Wikipedia).