Home » GENERA G-H » Gnidia » Gnidia squarrosa flower
Back to Category Overview
Total images in all categories: 9,580
Total number of hits on all images: 4,308,870 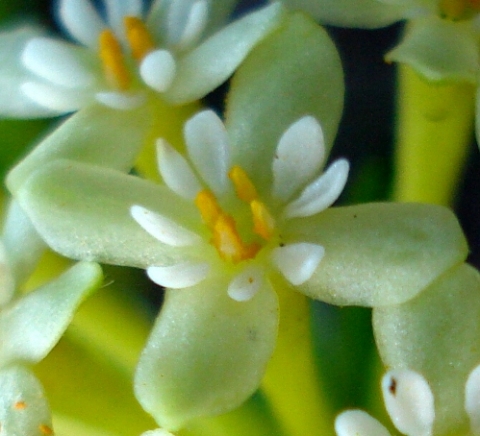 The Gnidia squarrosa flower in picture presents three components, each in its own colour:

Lowest is the four large sepal lobes in a dull cream to greenish grey; the tiny cells on their fleshy surfaces glistening.

Above them are the eight smaller, white petal scales that ascend around the anthers. These mini-petals are ovate in shape and concave with rounded tips.

The four erect, orange-yellow anthers visible here in the centre only represent the upper whorl of stamens. There are four more inside the tube on shorter filaments, equally ready to deposit their pollen upon tiny insects venturing inside (Manning, 2007; Bean and Johns, 2005).