Home » GENERA G-H » Gnidia » Gnidia pinifolia
Back to Category Overview
Total images in all categories: 9,410
Total number of hits on all images: 4,229,427 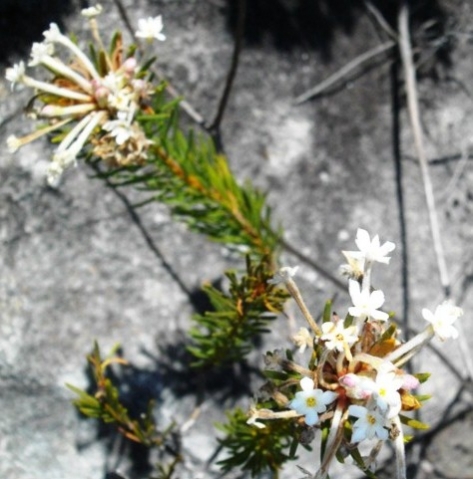 Gnidia pinifolia, the pine-leaf saffron bush, is an erect, single-stemmed shrub that grows to 1 m in height. The ascending, alternate leaves are crowded near stem tips. The hairless leaf shape is narrow to needle-like with pointed tips, becoming about 1,5 cm long. The involucral leaves around the flower clusters are wider.

Clusters of about ten long-tubed white flowers grow at branch tips. The buds may have some pink colouring on the unopened corolla outer surfaces. On open flowers four fleshy petal-like scales are found at the mouth in the gaps between the spreading, oblong corolla lobes. The flower fragrance is exuded after dark. Flowering happens all year round.

The distribution of the species is in the far southwest of the Western Cape, the habitat sandy flats and lower sandstone slopes. The species is not considered to be threatened in its habitat early in the twenty first century (Bean and Johns, 2005; Manning, 2007; www.redlist.sanbi.org).