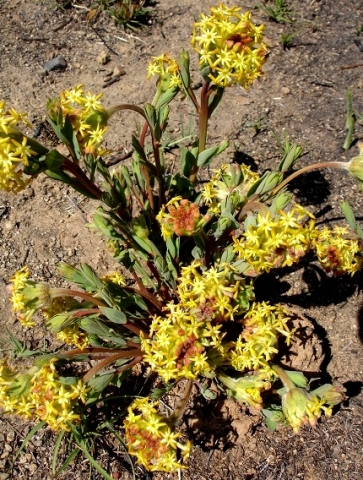 Gnidia kraussiana var. kraussiana, a multi-stemmed perennial, reaches heights of around 70 cm. This specimen was spotted north of Dullstroom in September. The plant occurs widespread in the eastern parts of South Africa in exposed grassland and also beyond the border in Lesotho, Swaziland, Zimbabwe and Mozambique.

Flowering occurs from midwinter to midsummer. This is a resprouting species, allowed by the woody underground rootstock to get head start on reseeding species after the grass fires that have become so common in the winter grass-veld of South Africa. The plant has a stable population in its distribution early in the twenty first century.

Another variation, G. kraussiana var. mollissima, is found even further to the north, from Zimbabwe to at least the DRC (Manning, 2009; iSpot; www.redlist.sanbi.org).