Home » GENERA G-H » Glottiphyllum » Glottiphyllum
Back to Category Overview
Total images in all categories: 11,241
Total number of hits on all images: 5,956,297 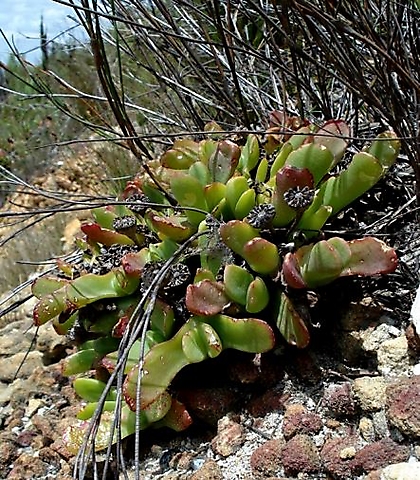 Glottiphyllum is a genus of low-growing, clump-forming or mat-forming leaf succulents of the Aizoaceae family, commonly called tonguefigs. The compact plants are mostly stemless, growing few short branches or rosettes on the ground, occurring in semi-arid and arid areas.

Four or more thickly fleshy leaves grow per branch, often distichous, ranging from bright green to red, purple or grey-green. The smooth leaves are sometimes wax-surfaced, their margins may be hairy or covered in water cells.

The generic name, Glottiphyllum is derived from the Greek word glossa meaning tongue, referring to the common tongue-shaped leaves of some species. Leaf forms also include linear, lance-shaped and twisted ones, while leaf-pairs are often unequal. Anisophyllous meaning having leaves of two or more shapes and sizes, is a feature of several Glottiphyllum species.

The solitary flowers grow stalkless or short-stalked from leaf axils, without bracts. There are four sepals and few whorls of usually yellow petals spreading in daylight, some only in sunlight. White, albino mutants are uncommon.

The variably fragrant flowers have no nectaries and no papillae on the filaments of the stamens. The ovary is semi-inferior, the five to fourteen stigmas spreading, reflexed or feathery. The placentas where the seeds grow are parietal, on the inside of the outer walls. Flowering happens in spring or autumn.

The 17 Glottiphyllum species occur in the Little Karoo, the Great Karoo, Tanqua Karoo and the karoid Eastern Cape.