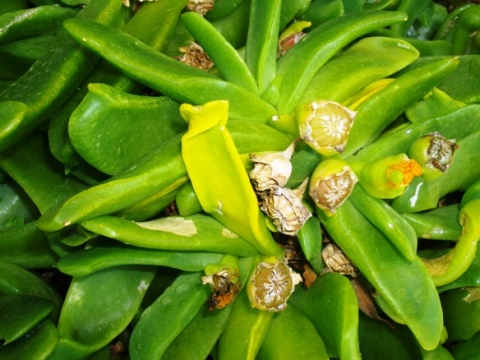 Glottiphyllum depressum is one of the tongue-leaf plants. The looks are captured in the genus name. The Afrikaans name of skilpadkos (tortoise food) speaks for itself. Glottiphyllums are often surprisingly bright green for their habitat. Branches and leaves of this prostrate species spread horizontally without getting a height beyond about 8 cm.

The fruit capsules are rounded at the base and have long teeth or valve wings at the top. Some of them are still visible on the plant in picture. There is also a new capsule with some visible orange petal remains on its top, next to other capsules in varying stages of ripening.

The distribution ranges from around Ceres in the west to Humansdorp in the Eastern Cape (Vlok and Schutte-Vlok, 2010).