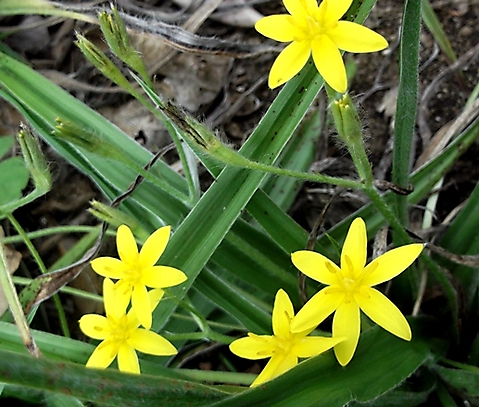 Hypoxis villosa, commonly the golden winter star and previously H. sobolifera, is a small perennial growing from a pear-shaped rootstock of up to 12 cm long. The plant reaches heights from 15 cm to 25 cm. It produces suckers or soboles.

The juice from the rootstock becomes black when dry. This has earned the plant another common name in Afrikaans of inkbol (ink bulb).

The species distribution is in the Eastern Cape, into the east of the Western Cape as far as Swellendam and possibly the south of KwaZulu-Natal.

The habitat is scrub and grassland near the coast and somewhat inland. The species is not considered to be threatened in its habitat early in the twenty first century (Bond and Goldblatt, 1984; Gledhill, 1981; iNaturalist; www.pacificbulbsociety.org; http://redlist.sanbi.org).