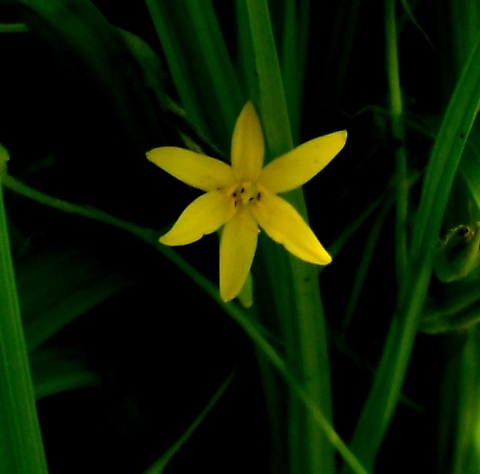 Hypoxis is a genus of rhizomatous, sometimes tuberous geophytes. The rhizomes of these perennials are erect in the ground, growing slowly and sometimes large: globose or elongated, many contain yellow sap. The stout roots often grow from the upper parts of the rhizomes. Much of the deciduous, above-ground plant material is hairy.

The fibrous, hairy leaves grow basal, three-ranked, longitudinally lined or grooved and linear or lanceolate in shape. The leaf-bases clasp the stem, while some species have leaf petioles. Older leaves may remain in part on the plant base as fibrous, dry material.

The inflorescence grows axillary on a leafless peduncle that varies in thickness and length. The flowers are arranged in a raceme or corymb, some few species bearing solitary flowers. One or two narrow bracts subtend each flower.

There are usually six stamens, all exserted. They are short and spreading, their filaments attached to the inside of the tepal bases. The inferior ovary is club-shaped to top-shaped, comprising three locules within which many ovules develop, attached to the central axis.

The capsule is still top-shaped to ovoid and thin-walled. The nearly spherical seeds are dark, in some species shiny. The generic name, Hypoxis, is derived from the Greek prefix hypo- meaning beneath and oxys, also Greek meaning sharp, referring to the shape of the capsule.

There are about 90 Hypoxis species, about 40 of which occur in South Africa.