Home » GENERA G-H » Hypoxis » Hypoxis rigidula
Back to Category Overview
Total images in all categories: 10,855
Total number of hits on all images: 5,509,167 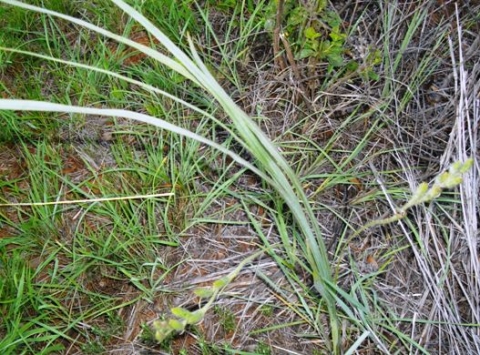 Hypoxis rigidula is a deciduous perennial herb growing annually from a fleshy rootstock.

The long narrow leaves of around 1 m in length are flat and strongly ribbed. The hairy leaved variety is H. rigidula var. pilosissima, the nearly hairless one H. rigidula var. rigidula. The unbranched flower stalk bears a spike of fairly large yellow flowers.

It is found in open grassland slopes of the summer rainfall regions of South Africa at altitudes up to 2300 m. Neither of the two varieties is considered to be threatened in its habitat early in the twenty first century (Van Wyk and Malan, 1997; Lowrey and Wright, 1987; www.pacificbulbsociety.org).