Home » GENERA G-H » Hypoxis » Hypoxis iridifolia leaves
Back to Category Overview
Total images in all categories: 10,855
Total number of hits on all images: 5,509,027 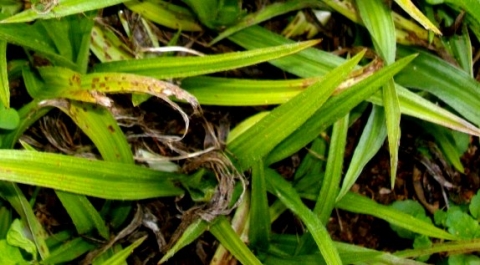 The nearly three-ranked to spirally twisted leaves appear above-ground annually before the inflorescence. They are lance-shaped and ribbed to channelled, tapering to acutely pointed tips that curve outwards gracefully. The stiff, dark green leaves are hairy on their keels and margins.

A few yellow flowers that nod grow in inflorescences seen during spring and early summer.

The plant distribution is widespread all over the eastern parts of South Africa from the Eastern Cape to Limpopo and North West, as well as in southern Africa beyond the border.

The habitat is sandy grassland. The species is not considered to be threatened in its habitat early in the twenty first century (Van Wyk and Malan, 1997; Pooley, 1998; Trauseld, 1969; Letty, 1962; www.redlist.sanbi.org).