Home » GENERA G-H » Huttonaea » Huttonaea oreophila flower
Back to Category Overview
Total images in all categories: 11,104
Total number of hits on all images: 5,771,863 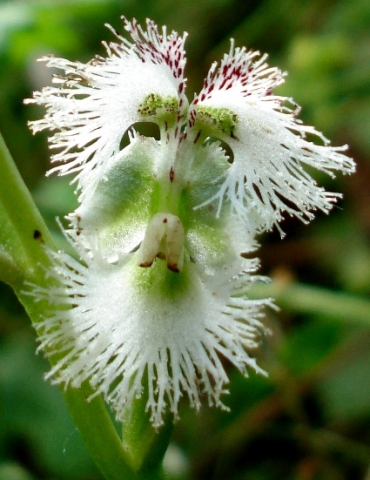 The flower of Huttonaea oreophila is smaller than that of H. grandiflora, but resembles it in structure. The flower in picture also resembles a hairy-faced dog. Pale green bracts that taper to acutely pointed tips clasp the ovary of each flower.

The two lateral petals are seen here at the top of the flower, the dorsal sepal hidden behind. The petal blades are often curved forward, their claws fused below. The dominant fringes of the fleshy, thin petal lobes are longer than the blades. These fringes, a feature of flowers of this genus, have some short, irregularly shaped branches and are purple spotted on the inner parts of the petal margins.

A similar fleshy fringe of thin white lobes adorns the spreading lip below the flower centre. The lip blade is green at its base, white for most of the rest of it. Above the central column in the flower the two large sepals are visible, positioned behind the claws of the petals. These sepals have less spectacular fringes, their blades partly green, partly white.