Home » GENERA G-H » Huttonaea » Huttonaea fimbriata
Back to Category Overview
Total images in all categories: 11,037
Total number of hits on all images: 5,688,466 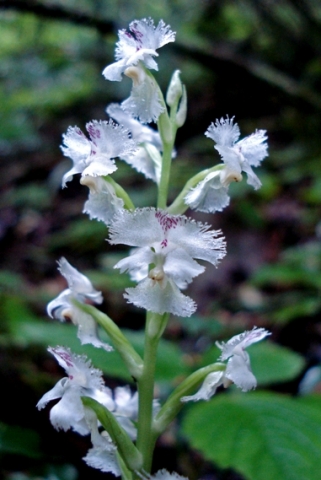 There are five Huttonaea species, the genus endemic to the eastern parts of South Africa and Lesotho. The huttonaeas are all terrestrial herbs growing from ovoid tubers, bearing flowers with fringed, clawed petals and lips without spurs.

The distribution of H. fimbriata is inland KwaZulu-Natal and Eastern Cape at elevations between 1800 m and 2200 m, the Drakensberg region. This plant was photographed near Wakkerstroom.

This habitat has a cool climate and cold winters, the plant growing on forest floors in deep shade receiving summer rain. The species is not considered to be threatened in its habitat early in the twenty first century (Pooley, 1998; www.orchidspecies.com; www.redlist.sanbi.org).