Home » GENERA G-H » Heliophila » Heliophila africana
Back to Category Overview
Total images in all categories: 9,410
Total number of hits on all images: 4,229,400 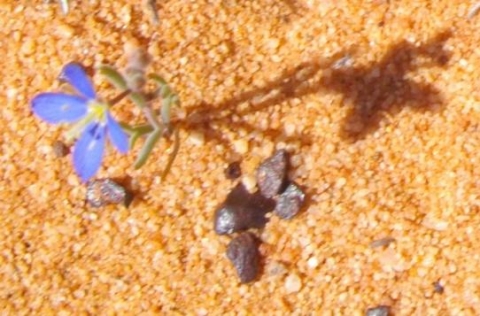 Heliophila africana, in Afrikaans known as bloubekkie (little blue mouth or beak), is a sprawling annual herb sometimes branching from the base and usually reaching 40 cm in height, occasionally taller than 1 m.

The alternate, simple leaves are narrowly lanceolate, dull to dark green and roughly hairy. Their margins may be slightly lobed or toothed.

The blue or mauve, four-petalled flowers have hairy sepals. The petals have small white patches at the base. In the photo it looks as if a second white mark is present in mid-petal. Flower diameter is about 1 cm. Flowering happens from late winter to mid-spring.

The fruits are thread-like, up to 10 cm long.

The species distribution is in the southwest of the Northern Cape and the west of the Western Province, from southern Namaqualand to the Cape Peninsula and eastwards to Swellendam.

The habitat is moist, sandy flats. The species is not considered to be threatened in its habitat early in the twenty first century (Manning, 2009; Manning and Goldblatt, 1996; www.redlist.sanbi.org).