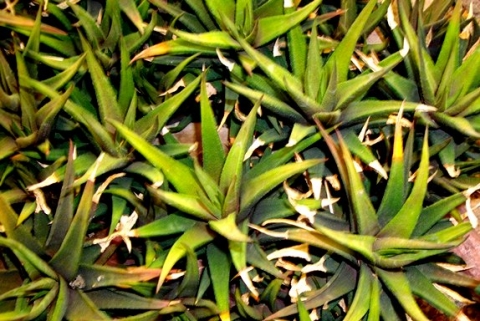 Previous
Image 3 of 28
Next

Haworthiopsis attenuata var. glabrata used to be known as H. glabrata. The stemless leaf succulent grows slowly and gets old, probably around 50 years.

The hard leaves are lance-shaped and narrow, tapering to slender, pointed tips. They recurve slightly and sometimes twist a little as well. Leaves are covered in tubercles causing the surfaces to be rough. These tubercles are smaller and less conspicuous than those on some of the other H. attenuata varieties. The leaf colour is dark green to bright or yellowish green, turning reddish to burgundy in direct sunlight.

The distribution lies in a part of the Eastern Cape fairly near the coast from the Kei River to the Mbashe River and around Butterworth. The plant is considered to be vulnerable in its habitat early in the twenty first century due to medicinal harvesting, succulent collections and habitat destruction (www.redlist.sanbi.org).