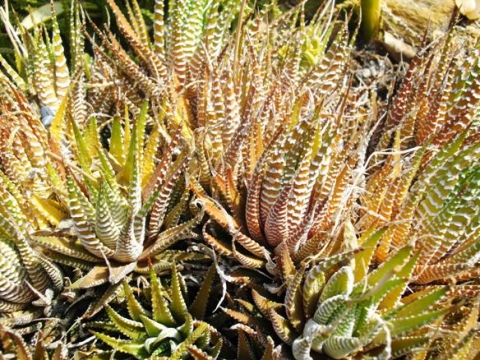 Previous
Image 2 of 28
Next

Haworthiopsis attenuata forma clariperla is but one of the recorded forms of this variable species. It is also referred to as a variety. A plate in the Kew Library depicts a plant named Haworthia clariperla, but this was probably a hybrid, not found again in nature (Scott, 1985).

H. attenuata in all its forms and varieties are endemic to the Eastern Cape. This one comes from near Fort Brown in the Albany district. The specimen in picture is displayed in the greenhouse at the Hortus Botanicus of the University of Stellenbosch.

The plant is stemless or very short-stemmed. It forms clumps through prolific suckering. The leaves are spirally arranged. They are covered (mainly on the outer surface) in horizontal, confluent and continuous bands of small white tubercles with notable tapering points. There may be from 30 to 40 leaves on one rosette of up to 8 cm in length. The inflorescence gets about 39 cm tall with spirally arranged small white flowers. The perianth segments have green keels (Scott, 1985; http://haworthia-gasteria.blogspot.com).