Home » GENERA G-H » Gorteria » Gorteria personata flowerhead
Back to Category Overview
Total images in all categories: 11,112
Total number of hits on all images: 5,778,974 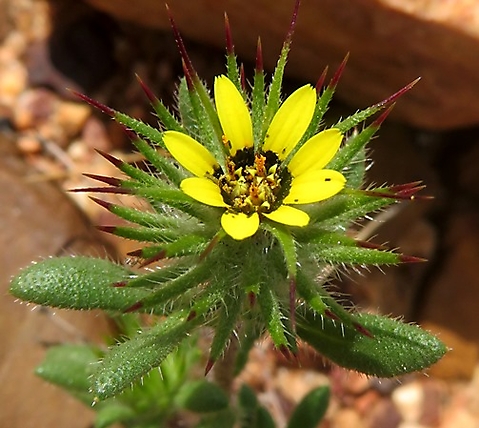 The flowerhead of Gorteria personata is sessile or nearly so, growing solitary from a stem-tip.

The involucre comprises several rows of stiff, sharply pointed bracts forming a big, hairy protective base for the head. These bracts harden after flowering, enclosing the fruits in their woody, burr-like coat. Straight-margined, pointed and hairy, the bracts are a bit like the leaves. There are no scales on the receptacle.

One whorl of usually about eight yellow ray florets surrounds the also few-flowered disc. The sterile rays may have blackish markings at the base, variable in size and shape. The ray base narrows into a claw. The generally fertile disc florets are deeply five-lobed, some of them in the centre may also be sterile. A flowerhead becomes 1,5 cm in diameter. Flowering happens from late winter to after midspring.

The individual fruit or cypsela is ellipsoid with silky surface and a pappus of small, bristle-like scales, remaining inside the burr formed by the bracts. It ripens in four to six weeks after flowering. One seed will germinate in the first rainy season, others remain in the burr and grow in the next one. The seeds are dispersed on the coats of mammals, people’s clothes, car tyres and several other convenient means demonstrating burr versatility.

The Afrikaans common name, bosduifdoring, suggests that rock pigeons contribute when the burrs cling to their feathers (Vlok and Schutte-Vlok, 2015; Manning and Goldblatt, 1997; Bond and Goldblatt, 1984; iNaturalist; https://florabase.dpaw.wa.gov.au).