Home » GENERA G-H » Gorteria » Gorteria personata leaves from below
Back to Category Overview
Total images in all categories: 11,112
Total number of hits on all images: 5,779,091

Gorteria personata leaves from below 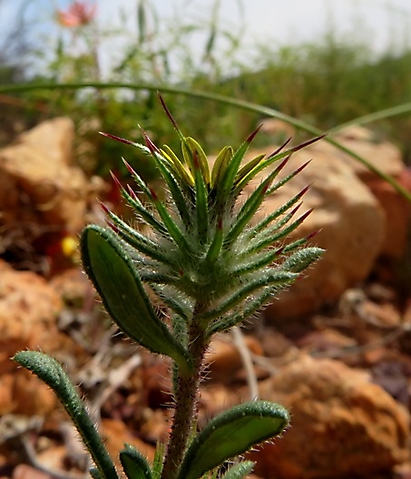 Seen from below, a Gorteria personata leaf reveals a faintly felted, pale lower surface, ringed by the strongly rolled under margins. The midrib is here a conspicuous artery along the leaf centre.

The ray florets of this daisy are variably emerald green on their lower surfaces. Immediately below the flowerhead the dense rows of closely clustered but free bracts, in picture red-tipped, are conspicuous although not as colourful as the florets. The bracts are straight, narrow, acutely pointed, resembling the leaves in hairiness and rolled under margins, but not in shape or size.

This platoon of spine-tipped, supportive bracts with hairy obstructions to visitor movement is clearly on duty to ensure that visitors enter the daisy premises from above and pollinate as required, rather than waste time and make mischief underneath the flowerhead (Vlok and Schutte-Vlok, 2015; Manning and Goldblatt, 1997; Bond and Goldblatt, 1984; iNaturalist; https://florabase.dpaw.wa.gov.au).