Home » GENERA G-H » Gomphocarpus » Gomphocarpus cancellatus
Back to Category Overview
Total images in all categories: 9,387
Total number of hits on all images: 4,216,948 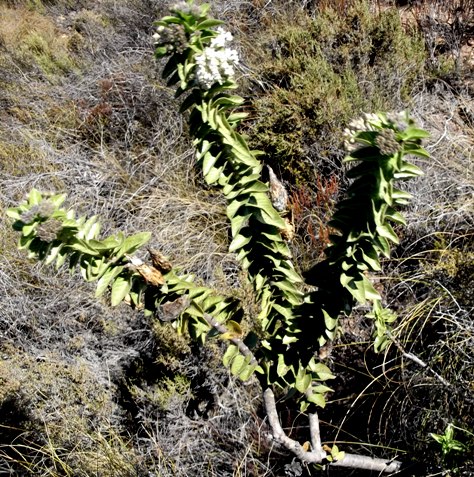 Gomphocarpus cancellatus stands out from fynbos vegetation due to the erect stems that become 1,5 m tall, its big leaves and unusual flowers. The plant is also conspicuous where it grows on rocky slopes in Namaqualand and Namibia, as well as in scrub of arid hills in the Eastern Cape. It also grows on the slopes of Table Mountain.

G. cancellatus has, like other noted or remarkable species, accumulated a number of descriptive names in popular parlance. These include bergmelkbos (mountain milk bush), regopmelkbos (erect milk bush) and dermhout (intestine wood). Each of these refers to some noted feature of the plant. Melkbos is a common name given to many plants containing milky latex, this species being one of them. Leaves drop off to leave lower stems pale grey and bare, resembling intestines.

The leaves of G. cancellatus are opposite, ovate to oblong, leathery and sometimes thinly fleshy. The leaf surface may be hairy or not. Its midrib and lateral veins are whitish and conspicuous. Leaf colour is dull green and sometimes shiny. The lower surface is whitish. The lateral veins curve inwards towards the tip in a regular pattern. The margins are entire, the tip tapering to a point or is sometimes rounded with a small point just at the tip. The leaf base is rounded (Manning, 2007; Bean and Johns, 2005; Clarke and Mackenzie, 2007).