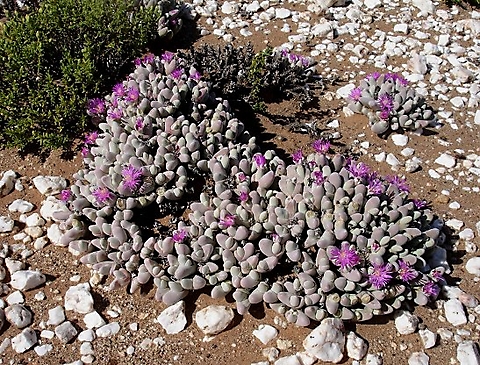 Comprehend the scale of a plant species, the typical size it normally achieves, and an otherwise small clump can be recognised as large in context. This may entail the biggest of a species currently in existence, rarely the biggest there has ever been (for who knows the truth about that) or stumbling upon that one place in nature where conditions favour the species to achieve sizes uncommon anywhere else.

Monster plants can, of course, be grown in artificial conditions with Mother Nature ostensibly only a sceptical onlooker through the glass. Behavioural scientists speak of typical performance and maximal performance, occasionally exceeded by coach inducement or army drill sergeant excesses, i.e. setting a new record.

Gibbaeum pubescens doesn’t do much in height, apart from clump bulging in the centre, the little domes of clustered fat leaves occasionally nearing hemispherical shape.

But keep looking in the white stony patches of the western Little Karoo veld for finding the biggest clump of G. pubescens ever. Count and record the number of leaf-pairs in the interests of science. For everyone with eyes, brain, curiosity and perseverance is somewhere on the route to becoming a scientist, depending on the direction in which he or she happens to be facing.

When leaf-pairs consistently differ like married couples or in mesemb genera like Gibbaeum, botanists refer to them as anisophyllous. It is uncertain whether plant evolution keeps up anywhere with the viral terminological evolution of this science infecting languages of the world, continually seeking to grasp increasing levels of precision in description (Frandsen 2017; Vlok and Schutte-Vlok, 2015).