Home » GENERA G-H » Gibbaeum » Gibbaeum pubescens
Back to Category Overview
Total images in all categories: 10,855
Total number of hits on all images: 5,508,168 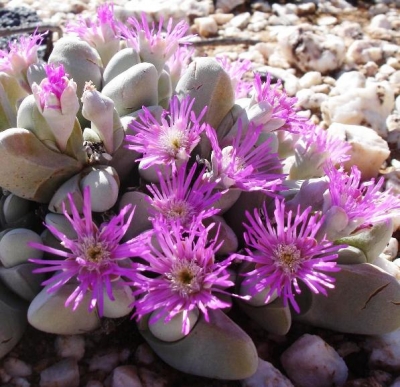 Gibbaeum pubescens grows a little clump of dense succulent leaves at ground level stems may become as wide as 25 cm. It used to be called subsp. shandii but the two subspecies don't seem to be upheld any longer. The other one was G. pubescens subsp. pubescens. Pubescent refers to tiny hairs on the leaves.

People who garden or produce food have more exacting requirements for their plant environment in terms of keeping them alive than the plants themselves. This may result in the urge to ban insects from the living space of their protege plants altogether! Glass houses where the insects may not enter is a mild form of such measures. Poisons to kill all the insects within flying or crawling distance of the plants may be more effective, but unintended consequences of using poisons are being noted increasingly today. The eradication of unwanted species and thereby reducing biodiversity, usually turns out to bring unintended negative consequences.

The species distribution is limited to the western parts of the Little Karoo. The habitat is quartzite outcrops among karoid scrub. Most rain falls here in winter. The species is not considered to be threatened in its habitat early in the twenty first century (Smith, et al, 1998; http://redlist.sanbi.org).