Home » GENERA G-H » Gibbaeum » Gibbaeum pachypodium
Back to Category Overview
Total images in all categories: 10,855
Total number of hits on all images: 5,508,110 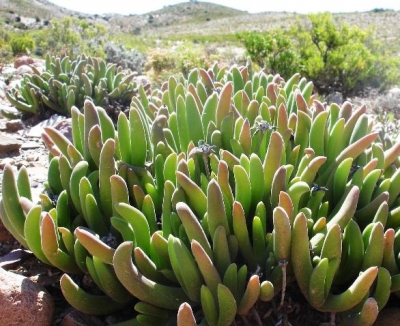 Gibbaeum pachypodium has unusually long green leaves, compared to many other species of the genus. The leaves are succulent and triangular in cross-section, growing on sprawling branches. The pale pink flowers also have longer stems, conspicuous among the erect leaves. Flower diameter is about 2 cm in diameter. Flowering happens in late spring.

The species distribution is very small near Ladismith in the west of the Little Karoo in the Western Cape. The habitat is exposed flats and slopes in gravelly and shale soils. G. pachypodium is critically endangered early in the twenty first century (Vlok and Schutte-Vlok, 2010; http://redlist.sanbi.org).