Home » GENERA G-H » Gibbaeum » Gibbaeum heathii a bit of everything
Back to Category Overview
Total images in all categories: 10,855
Total number of hits on all images: 5,508,966 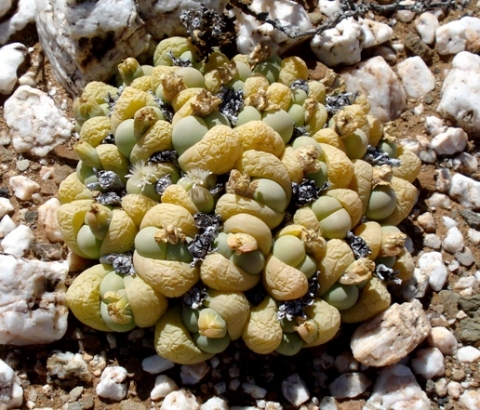 Previous
Image 4 of 15
Next

Gibbaeum heathii, commonly known as baby bums, is a clumping dwarf plant, endemic to the western parts of the Little Karoo.

It is a variable succulent that does not get taller than 4 cm. Each paired leaf-body, globular from succulence, becomes from 1 cm to 3 cm in diameter. The clump is a busy affair: old leaves have new ones growing from their midst, bud tops bulge their rounded sepals, radiate flowers and woody fruit capsules all face up, all over the place.

Although every leaf pair is unique, that ubiquitous reminder among people seeking meaning in life, they all have much the same characteristics. The old and the new go through the same stages, side by side in life’s repeating sequence of functional existence. The sameness, the belonging to a species, the participating and contributing bring sufficient sense to finite beings that have composure.

The plant grows in winter, its young leaves blue-green, globular and smooth, presenting a healthier colour than the wrinkled predecessors giving way. As summer sets in, accompanied by heat and drought, signs of deceleration predominate. The plant holds its own, prepared for toughing it out by rationing resources, always favouring the reproductive parts performing at a given time.

Drawing on stored resources is timed within the seasonal sequence. Seasons change, demand differently each year. Slowing down into cyclical rest mode is a logistical art of avoiding death mode. Species respond to environment, each becoming one with its ecology as perfected all over the shared existence. No research, no planning, no voting, just living taken seriously.

Flowers die and seeds grow, old leaves become yellow and wrinkly from moisture and chlorophyll loss. Will there be enough left next year to stir inside when the harbingers of new life signal the command? The species is not considered to be threatened in its habitat early in the twenty first century (Vlok and Schutte-Vlok, 2010; Smith, et al, 1998; www.redlist.sanbi.org).