Home » GENERA G-H » Gibbaeum » Gibbaeum or Argyroderma
Back to Category Overview
Total images in all categories: 11,112
Total number of hits on all images: 5,778,887 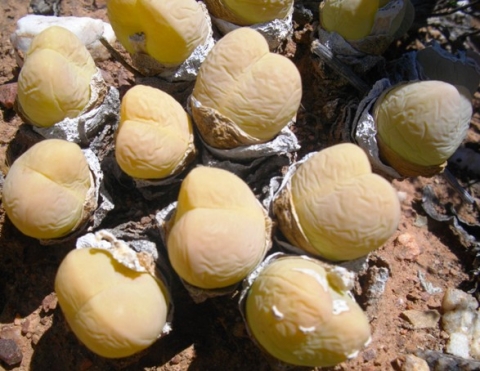 The paired, globular leaves in picture show wrinkling of moisture loss as expected in the dry summer season. White, papery remains of the skins of leaves from the previous year persist near the base of each pair. When the desiccation that sets in during off-season life is complete, these succulent leaves will also be dry, folding over the newly grown leaves as a protective cover. Later, when that job of serving as clothes for successors is done, they will sag and disappear slowly from around the functional leaf pair of yet another season, discarded as the currently old ones are discarded here.

New leaves (and flowers in season) will appear after winter rain through the slit in the centre of each globular leaf-pair. The two leaves of each pair are fused at the base in a rounded leaf-body, the slit between them clear to see at the top, but not reaching quite down on the sides. The leaf keels on top of the leaves are not equally pronounced on all the pairs in picture. These keels run perpendicular to the slit between the leaves and slightly off-centre from the top. Below-ground branching has allowed several leaf pairs to form a clump.

It was thought that this plant is Gibbaeum heathii, but that seems incorrect. Plants of the Gibbaeum and Argyroderma genera share some of the features displayed by this plant. Shape should be more helpful than colour for attempting identification here, as young leaves would probably be differently coloured to these. Flowering would contribute much but that does not happen in off-season plant photos often.