Home » GENERA G-H » Gibbaeum » Gibbaeum heathii in winter
Back to Category Overview
Total images in all categories: 11,037
Total number of hits on all images: 5,689,190 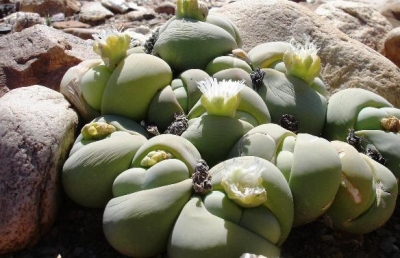 Gibbaeum heathii is a Little Karoo mesemb that has become a popular indoor plant in many parts of the world. Those succulent gardeners that live in areas where they have winter rain and hot, dry summers may grow it outside on a well-drained rockery.

The flowers are small, the petals short above a conspicuous fleshy calyx. There may be up to 140 stamens in one flower, but no staminodes. The filaments are white, the anthers and pollen pale yellow. The pedicels of the flowers are slightly over 1 cm long, the flowers partly enclosed between the leaves.

The plant forms a small clump or mat of leaf bodies on short stems. The leaves are sometimes partly sunken into the ground. The leaf body is paired, joined in their lower parts and semi-globose, the two parts sometimes slightly unequal, their surfaces hairless. This brings some protection against the extremes of the elements. Old leaves also cover new ones for a time, performing the same service.

Three subspecies of this variable plant have been recorded (Vlok and Schutte-Vlok, 2010; Smith, et al, 1997; http://llifle.com).