Home » GENERA G-H » Geissorhiza » Geissorhiza exscapa
Back to Category Overview
Total images in all categories: 8,960
Total number of hits on all images: 3,972,429 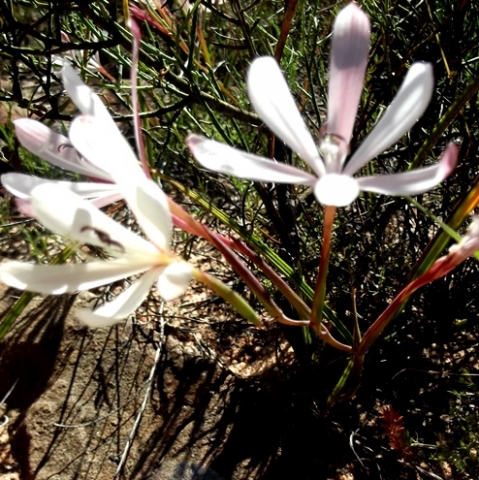 Geissorhiza exscapa, in Afrikaans commonly known as langpypie (little long pipe) and previously as Engysiphon longitubus, is a cormous perennial growing annual leaves and flowers to heights from 18 cm to 30 cm. The corm is covered in layers of hard brown tunic that fragment irregularly.

The three narrow leaves are longitudinally grooved and sticky, often having sand adhering to them. The leaf margins are rolled in.

The inflorescence consists of several flowers in a spirally arranged spike. Each flower is subtended by a soft-textured, green to reddish bract, about half as long as the long, slender corolla tube that makes this the langpypie.

The cream to ivory flowers have narrowly oblanceolate tepals, widest near their rounded and in-curving tips. The inner and outer tepals do not manage radial symmetry, the flower zygomorphic. There are visible veins upon the inside surfaces of the tepals, the outside surfaces flushed red while the flowers fade to pink. The anthers, grey in picture, protrude conspicuously from the corolla mouth. Flowering happens in the first half of spring.

The species distribution lies in a broad west coast swathe from Bloubergstrand to Hondeklipbaai and southern Namaqualand, inland to Nieuwoudtville, the Bokkeveld Escarpment and the Olifants River valley.

The habitat is sandy flats and sandstone plateaus. The photo was taken in the Gifberg in October. The species is not considered to be threatened in its habitat early in the twenty first century (Manning, 2007; Manning and Goldblatt, 1996; Bond and Goldblatt, 1984; iNaturalist; http://redlist.sanbi.org).