Home » GENERA G-H » Geissorhiza » Geissorhiza aspera
Back to Category Overview
Total images in all categories: 9,742
Total number of hits on all images: 4,371,483 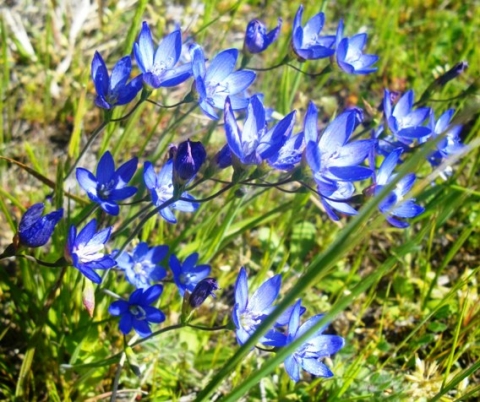 The abundance of bright star-like spring flowers of the blue sequin or sysie as Geissorhiza aspera is commonly known, is a joy to all in the Western Cape coastal and Little Karoo veld.

This cormous perennial of the Iridaceae family with its erect and narrow, sword-shaped leaves replaces above-ground parts annually with the help of the winter rain. It grows in sandy soil on lower slopes and flats. The corm is asymmetrical, a feature shared with all the many species of the subfamily of Iridaceae called Crocoideae. The flower may be blue or violet, occasionally pink or white, with a short tube and characteristic brown-tipped bracts.

Pollination is done by a variety of insects, particularly monkey beetles. By October the flowering is done and seed is formed (Vlok and Schutte-Vlok, 2010; Manning, 2009; www.plantzafrica.com).