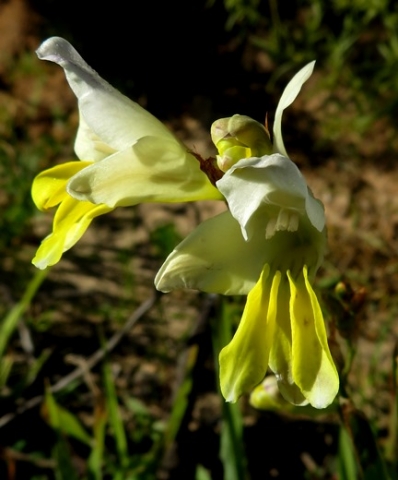 The Freesia genus of the Iridaceae family comprises geophytic perennials growing from conical corms ranging from 1 cm to 2,5 cm in diameter. The plants bear annual, sparsely branched stems and basal, sword-shaped leaves with raised midribs. The leaves grow in an erect or prostrate fan, their texture soft and their tips bluntly pointed or rounded.

Can herbivores be less bothersome if plants position their leaves flat on the ground? It depends on what is more readily available as fodder, otherwise mouths will evolve again. The strategies followed by extant plants cannot be totally discredited as the plants prove them by still being around.

The lowest two or three are not normal leaves but cataphylls, i.e. reduced, small or sometimes scale-like leaves modified to perform specialized functions other than mainly photosynthesis.

A Freesia inflorescence is a horizontal spike bearing flowers on its upper side. The flowers are fragrant, strongly so in some species. Two bracts subtend each flower, soft or leathery, often brown-tipped.

The flower is zygomorphic, i.e. laterally symmetrical and variably funnel-shaped in its narrow or wide corolla tube. Colours vary from white and yellow to pink and red, sometimes with darker markings on the three tepals of the lower lip.

Most of the 14 species grow in the winter rainfall region of southern Africa in fynbos, few in the eastern, summer rainfall parts and northwards as far as Kenya and Sudan.

The genus is related to Tritonia and Crocosmia and some cases of close resemblance occur. Commercial Freesia hybrids and cultivars are sought after worldwide, common in many gardens.

The flowers in picture were photographed south of Vanrhynsdorp during August. The tepals of the lower lip are channelled and yellow, apart from some tip parts that are white like the upper tepals. The arched stamens have oblong, whitish anthers borne close together under the upper lip. The species could not be determined (Vlok and Schutte-Vlok, 2015; Manning, 2007; Leistner, (Ed.), 2000; iNaturalist; Wikipedia).