Home » GENERA E-F » Freesia » Freesia occidentalis
Back to Category Overview
Total images in all categories: 12,091
Total number of hits on all images: 7,393,176 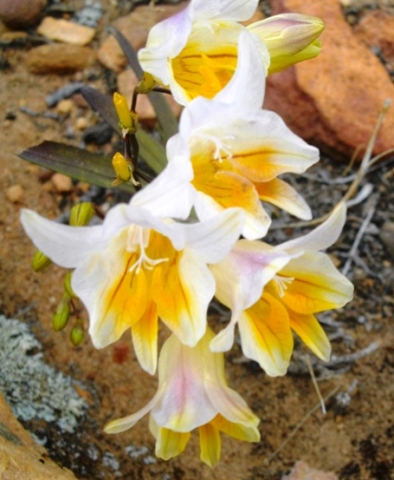 Freesia occidentalis, previously F. framesii, is a cormous perennial growing annual leaves and flowers to heights from 9 cm to 50 cm.

The few soft-textured leaves are sword-shaped, grown in a fan. There is a raised midrib on the leaf, the tip blunt or somewhat rounded. The leaves are usually shorter than the inflorescence.

The species distribution is in the north of the Western Cape and the south of the Northern Cape, from Calvinia and Laingsburg to the Cederberg and Touws River.

The plants grow in stony soils in arid fynbos where temperature extremes and low winter rainfall characterise the habitat. The plants are often found on south-facing slopes. The species is not considered to be threatened in its habitat early in the twenty first century (Bond and Goldblatt, 1984; iSpot; www.pacificbulbsociety.org; www.biodiversityexplorer.org; www.redlist.sanbi.org).