Home » GENERA D-F » Euclea » Euclea undulata stems
Back to Category Overview
Total images in all categories: 9,840
Total number of hits on all images: 4,473,028 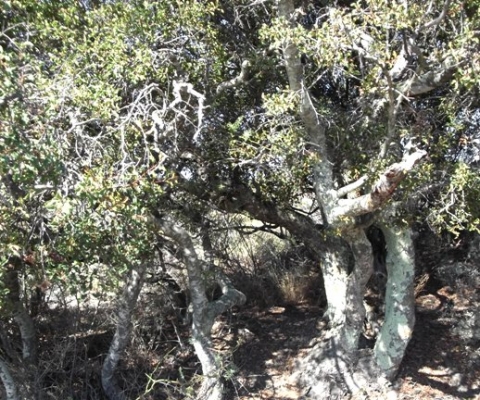 The stem of Euclea undulata is covered in grey bark that becomes longitudinally fissured on old stems. There is also flaking in patches, smooth surfaces on the young stems. While lower stems may be erect, branches are seldom straight in long sections, continued branching and crooked growth the norm.

The roots and bark of E. undulata are variously used in traditional medicine for treating a range of conditions. The leaves are browsed by stock and game. Stems served as fence posts in the past. The wood is hard, close-grained and durable, having dark heartwood. Dead wood is popular as quality firewood.

The tree is desirable to gardeners, given its looks. Hardiness exhibited in drought and frost resistance render it suitable, but growing E. undulata from the often parasitised seed is a challenge.

Another common name, fire fighter’s blessing, is self-explanatory, disclosing characteristics of the sturdy, leafy branches. Even if the fire doesn't kill the tree, a sacrifice is likely to be required for extinguishing it (Coates Palgrave, 2010; Pooley, 1993; Grant, et al, 2003).