Home » GENERA D-F » Euclea » Euclea undulata berries
Back to Category Overview
Total images in all categories: 9,590
Total number of hits on all images: 4,314,517 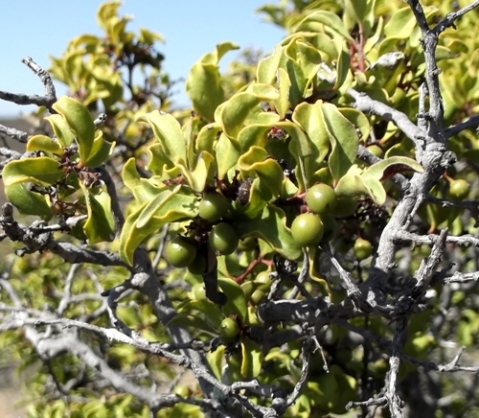 The green fruit of Euclea undulata seen here in March near Montagu are spherical and smooth. The berries grow in small clusters among the leaves, thinly fleshy and ranging from 4 mm to 7 mm in diameter. As they ripen, their colour will changes to red-brown, black or purplish black.

The fruits, seen from end summer to midspring, are edible, usually considered less tasty by humans, but popular with monkeys, baboons and birds, ensuring wide seed dispersal. About half the trees encountered won’t have fruits, being the male ones of this dioecious species.

The small, whitish flowers of E. undulata grow solitary in short unbranched spikes from leaf axils. The flowers that attract bees appear in summer and autumn.

Fruits and leaves of this species are smaller than those of E. divinorum, a similar plant with smaller distribution (Coates Palgrave, 2010; Pooley, 1993; Grant, et al, 2003).