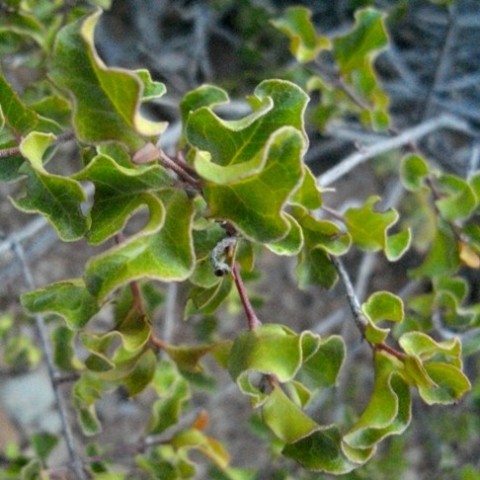 Euclea leaves often assist identification in at least arriving at the genus by showing leaf vein translucence when held against the light. Possibilities are narrowed down by such features, although biology is rife with shared and overlapped characteristics in related species, besides the distinguishing ones. This preserves modesty in those who care to identify plants they don't see often or haven't grown up with; lengthens the list of clues to be considered in each case.

These Euclea undulata leaves exhibit their pale cream veins clearly, in-curving and branching around the conspicuous midribs of the broad, undulating leaves. In this photo the leaves appear to be more ovate than obovate, the widest part of the leaf being closer to the base than the tip. Leaf margins are pale.

Upper young branchlets among the leaves are reddish from a rust coloured exudate. Where leaves have dropped off, not very far behind the branch tips, the bark becomes pale grey, the stems woody (Coates Palgrave, 2002; Pooley, 1993; Grant, et al, 2003).