Home » GENERA D-F » Euclea » Euclea undulata
Back to Category Overview
Total images in all categories: 8,897
Total number of hits on all images: 3,868,128 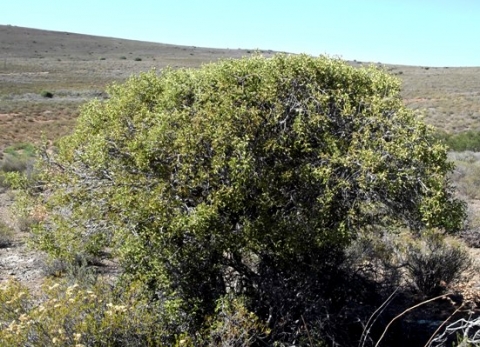 Euclea undulata, the common guarri or small-leaved guarri, is a dense, evergreen shrub or small tree growing to 4 m, occasionally reaching 7 m (SA Tree List No. 601). A neat, dense, rounded canopy is typical. The photo was taken near Montagu, more of the same trees scattered in the distance among the short scrub.

The common guarri grows everywhere in South Africa apart from the sandy far Northern Cape and parts of the Free State. The habitat is inevitably variable over such a large distribution that extends into tropical Africa.

These trees may be scattered sparsely or form thickets. They grow on rocky slopes and ridges covered in scrub, open woodland in grass or in mopane veld and more. They often grow in brackish soils, but also near watercourses, on termite mounds and on land from arid to tropical regions (Coates Palgrave, 2010; Pooley, 1993; Grant, et al, 2003).