Home » GENERA E-F » Euclea » Euclea tomentosa fruit
Back to Category Overview
Total images in all categories: 11,789
Total number of hits on all images: 6,937,252 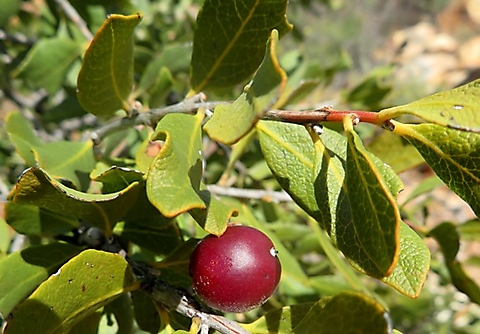 The Euclea tomentosa fruits grow on the female trees, the species being dioecious. The thinly fleshy fruit is an almost spherical berry, up to 9 mm in diameter. They grow solitary or in small clusters, becoming red and purplish to nearly black when ripe around the second half of spring. There is a small style leftover visible at the fruit tip in picture.

The white flowers preceding the fruit grew in few-flowered clusters from leaf axils. The bracts behind the flowers drop off early. The flowers are covered in crisped white hairs.

Flowering happens in about the first half of spring. The photo was taken in September (Coates Palgrave, 2002; Bond and Goldblatt, 1984; iNaturalist).