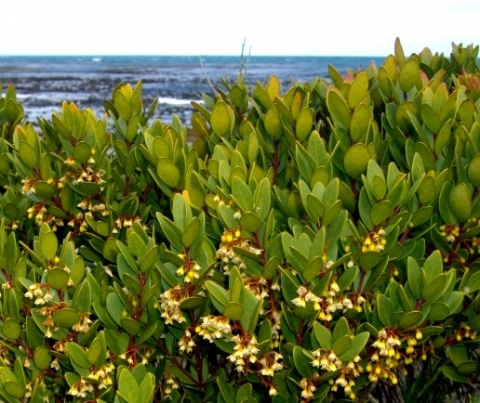 Euclea racemosa subsp. racemosa, commonly known as sea guarri or dune guarri, is an evergreen, often multi-stemmed shrub or small tree from 1,5 m to 6 m in height (SA Tree List No. 599). There are several more subspecies growing along the coast, some only in KwaZulu-Natal.

This one is found along the coast of the Western Cape, the Northern Cape and southernmost part of Namibia. The photo was taken by the coastal path at Vermont.

The specific name racemosa means that the flowers grow in a raceme, an abundant cluster. A raceme in botanical sense is a flower cluster with the separate flowers attached by short equal stalks at equal distances along a central stem. The suffix -osus (Latin) indicates abundance or fullness. The Latin word racemus means a bunch of grapes or cluster of similar fruits.

These shrubs grow on dunes in scrub thickets and forests of the winter rainfall region. They are not considered to be threatened in their habitat early in the twenty first century (Coates Palgrave, 2002; Privett and Lutzeyer, 2010; Van Wyk and Van Wyk, 1997; Andrew, 2017; iNaturalist; http://redlist.sanbi.org).