Home » GENERA E-F » Euclea » Euclea racemosa subsp. racemosa in flower
Back to Category Overview
Total images in all categories: 11,789
Total number of hits on all images: 6,937,010 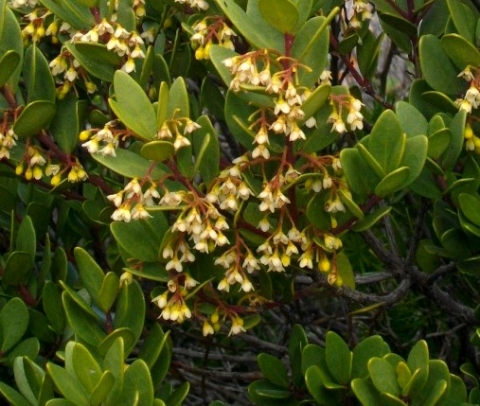 The stems of Euclea racemosa subsp. racemosa are covered in grey or pale grey bark that is often smooth, sometimes with rough, shallowly gnarled patches mainly from dropped-off branchlets. The young branchlets are angular, hairless and usually reddish.

The ascending leaves spiral up the stems or grow opposite or sub-opposite each other on sometimes wrinkled petioles from 1 mm to 4 mm long. The leaf-shape is lanceolate to elliptic with tip rounded and base tapering. The flat, dark green to dull green blades are leathery and faintly glossy; lower surfaces paler. The pale midrib is sometimes conspicuous, the veins variably translucent against the light. The thick margins are entire and rolled under. Leaf dimensions are commonly 2,5 cm by 1,5 cm.

The small, creamy white flowers grow in pendulous 4 cm long racemes from leaf axils. There are from eight to twenty flowers in one inflorescence; the sexes apart on different trees (dioecious). Flower stalks are longer than the flowers, the petals angled out in a bell-shape, the calyx small. Flowering happens in summer to early autumn.

The fruit is a thinly fleshed, spherical berry becoming up to 7 mm in diameter. Initially green and hard, it turns black when ripe at the end of summer and in autumn. The fruit is often parasitised by a kind of fly (Coates Palgrave, 2002; Privett and Lutzeyer, 2010; Van Wyk and Van Wyk, 1997; iNaturalist).