Home » GENERA D-F » Eriocephalus » Eriocephalus purpureus
Back to Category Overview
Total images in all categories: 11,018
Total number of hits on all images: 5,656,285 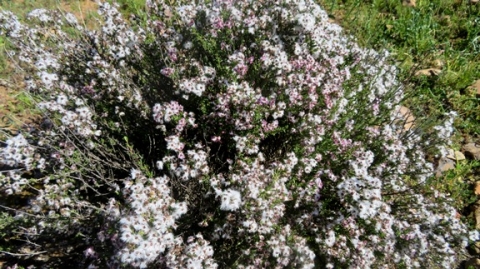 Eriocephalus purpureus, commonly the bitterbos (bitter bush) and previously E. xerophilus, is a branched, rounded shrub that reaches 60 cm in height. The old branches are brown to greyish and longitudinally striped. Some purple flowers are still visible in picture among many woolly fruits.

The species is found in southern Namaqualand in the Northern Cape and in a small part in the north of the Western Cape. The photo was taken on the Matjiesfontein flower farm near Nieuwoudtville.

The plant grows on lower slopes and flats, also on higher plateaus among karoid shrubs. The plant is adapted to or thrives in arid conditions as the old specific name, xerophilus, indicates. The little rain it receives falls in winter. The species is not considered to be threatened in its habitat early in the twenty first century (Manning, 2007; Bond and Goldblatt, 1984; iNaturalist; JSTOR; http://redlist.sanbi.org).