Home » GENERA D-F » Drosanthemum » Drosanthemum speciosum
Back to Category Overview
Total images in all categories: 8,940
Total number of hits on all images: 3,961,281 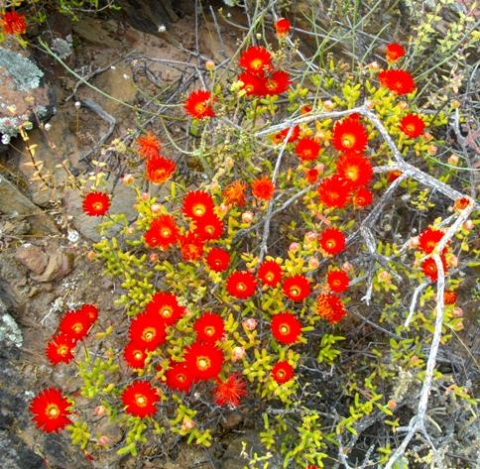 Drosanthemum speciosum, one of the species that carries the Afrikaans common name of douvygie (dew mesemb), has large, water-filled cells on its leaf surfaces that glisten in sunlight. Drosos, the Greek word for dew and anthos meaning flower, show that the entire genus was named for this feature of some of its members. Water cells or bladder cells are not unique to this genus. They are modified trichomes that serve to remove salt from the plant system in many Aizoaceae species.

The rounded shrub, sometimes as tall as 80 cm, is in season covered in flowers, weather permitting The orange to red flowers have a few rows of petals and black staminodes around the stamens in the flower centres. Because the flowers are normally open between 9 am and 5 pm, they are sometimes referred to as municipal workers.

The species is distributed in the western Little Karoo and a little further to the west, a region from around Barrydale to Worcester. It grows on flats and lower slopes among the karoid scrub, flowering after winter rain and in early spring (Vlok and Schutte-Vlok, 2010; www.thinkoholic.com; www.plantzafrica.com).